In this episode of the MikiDZ Podcast, the crew recaps the highlights from DJ Dainjazone‘s recent wedding. The party was helmed by DJ UnieQ and Paris Paul and featured a very special guest. During the reception, LMFAO‘s Redfoo gave the crowd a performance to remember. Grammy-Award winning DJ/producer Lil Jon joined the R.O.A.D. Podcast this week. The fellas spoke to the King of Crunk about his 2013 smash “Turn Down For What” with DJ Snake.

Lil Jon also shared how he produced Too $hort‘s “Blow The Whistle” and E-40‘s “Tell Me When To Go” featuring Keak Da Sneak in the same week. On last week’s episode of the R.O.A.D. Podcast, the crew sat down with DJ/producer Thee Mike B. The Los Angeles native explained how he founded the legendary Banana Split party with DJ AM and Steve Aoki.

Mike B also shared how the infamous party influenced Redfoo into developing the LMFAO sound. Earlier this year, rapper Rick Ross filed a copyright infringement lawsuit against LMFAO over their 2010 hit, “Party Rock Anthem.” According to court documents released by The Hollywood Reporter, LMFAO’s song is a derivative work and seeks to capitalize on Ross’ own hit, “Hustlin’.”

LMFAO begs to differ, though. According to Design & Trends, the duo filed court documents last week which ask for the suit to be dismissed. The documents state, “the lyrics of the composition ‘Party Rock Anthem’ tell a story and express a life philosophy completely opposite to the story and philosophy celebrated and espoused in ‘Hustlin.'”

So how much money could be involved?

The Inquisitr writes, “Ross and co-composer Jermaine Jackson are seeking an injunction and maximum statutory damages from LMFAO. While no figure was given, the damages could amount to a substantial amount considering the massive sales figures of ‘Party Rock Anthem,’ and its use in various films, TV shows, video games and advertisements. The phrase in question has also appeared on T-shirts and other items in LMFAO’s Party Rock Clothing line.”

Back in June, Redfoo of LMFAO told TMZ that a face-to-face meeting with Ross could end the disagreement. “I got love for Rick Ross, that’s real…and honestly I think it’s a misunderstanding,” he said. “I know if me and Rick got on the phone, if we met in person we would talk about some stuff…it’d be over, and I’m willing to do that.” 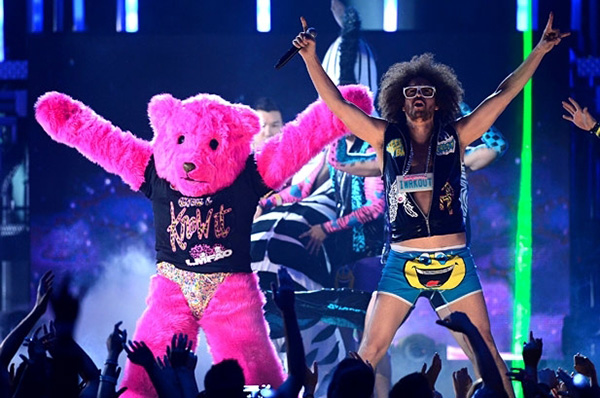 LMFAO’s chart-topper contains the lyrics “Everyday I’m shufflin'” which Ross claims is an illegal “derivative” of his phrase, “Everyday I’m hustlin’,” from his 2006 debut single.

Rick Ross says his phrase was important to the success of “Party Rock Anthem” which has sold 7.5 million copies and been licensed for numerous films, television programs, video games and more.

The lawsuit comes two weeks after Ross’ victory in a dispute with “Freeway” Ricky Ross. The famed drug dealer claimed Rick Ross’ persona was partly based on his likeness.