DJ ND, a five-time DMC Belgium Champion, has shared a new routine that features his and Magicut’s edit of Keys N Krates’ “U Already Know.” The two-minute video, which displays ND’s cutting and juggling skills, was filmed at Ortofon’s factory in Denmark. 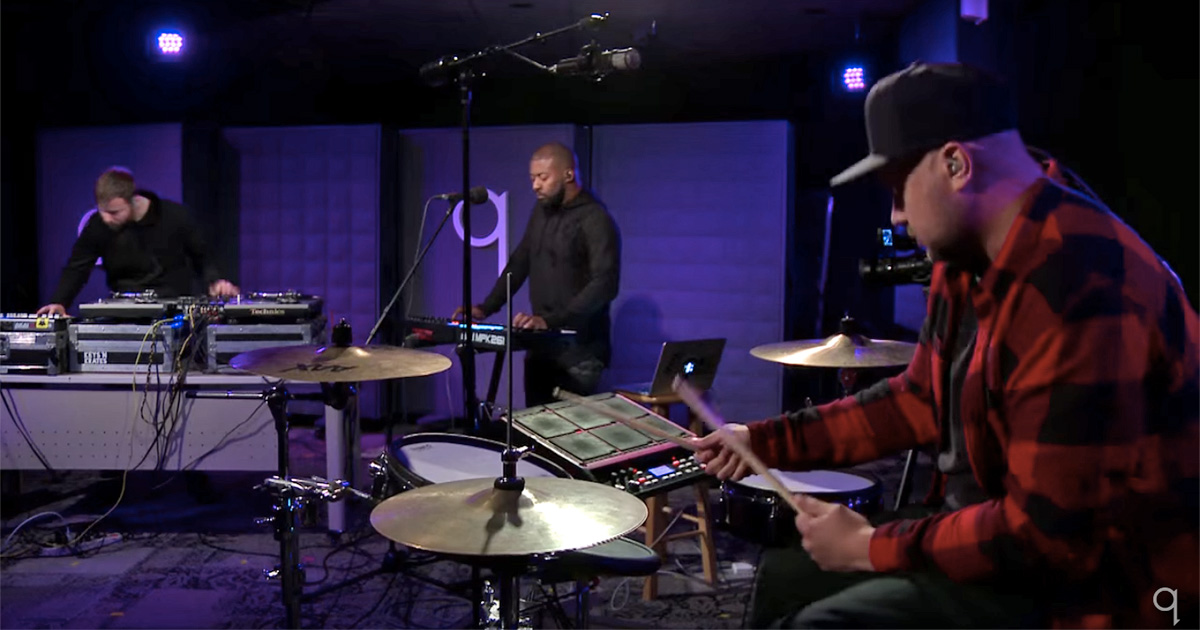 Last Friday, we posted our interview with Keys N Krates just hours before their debut at the Coachella festival. Today, the hip-hop and electronic band is back again, this time for a special performance in Serato’s new video.

Keys N Krates’ lineup, as their name suggests, features a keyboardist and DJ, along with a drummer. Although his use of turntablism is subtle, Jr. Flo is an award-winner and Serato’s video intends to showcase his skills (and Rane’s new TTM57mkII Serato DJ mixer).

Watch above to see the band perform their Dim Mak-released single “Understand Why” with an extended scratch solo. Keys N Krates will most likely play it tomorrow during the second weekend of Coachella, so check them out if you plan on attending the festival. Live instrumentation is becoming more prevalent in electronic music, but Keys N Krates have been serving up bass-filled beats since 2008. The Toronto trio, which consists of a drummer, keyboardist and turntablist, have released a string of singles on Dim Mak and Mad Decent over the last two years. They’ve also performed at festivals such as TomorrowWorld and Ultra Music Festival, and today, will make their debut at Coachella. Below is a conversation we had with the band about their innovative approach and views on the current state of DJing.

More and more people are making music with computers these days. Why did you form a band?
Adam Tune: We actually started as a band before we produced on computers. So when we all started producing with computers, it still made sense for us to play our music as a band. That’s just our way of performing.

Some artists produce with computers but perform with live instruments. Do you take that approach or write songs as a band?
Jr. Flo: Our writing process varies and there’s often a give and take between our live playing and studio production. Sometimes one of us chops something up and then we all make it into a song and figure out how to play it live. We also come up with tunes during live jams that get taken to the studio and produced, and then taken back into the jam.

Have you found it difficult to connect with crowds that are accustomed to DJs?
Tune: Not really. We’re still playing loud bass music, and I think kids who go to see EDM DJs connect with that. However, our set isn’t necessarily 110 percent the whole time. It has peaks and valleys, so it feels a little more like a concert than most main stage DJ sets.

Flo, how has your approach to DJing changed in the context of a band, given your turntablist background?
Flo: I’m now a member of a band and have to do things that make musical sense with two other players. Sometimes that means I have to fall back and do simple stuff. When you’re a solo act, you’re constantly trying to prove how good you are at your craft. I don’t think about it anymore, though. I just focus on what’s going to sound good with the other players.

What’s your take on A-Trak’s “real DJing” campaign?
It’s great because it’s showing the other side of DJing which requires incredible skill, dedication and raw talent. Nowadays, the biggest acts in the world are producers, not necessarily DJs. But they’re labeled as DJs, and that’s not very accurate. They’re usually booked to play their productions rather than for their DJ skills. I’m totally okay with all that, but it’s cool to see people expose what a real DJ does. You have guys like [Arcade Fire’s] Win Butler, who I respect the shit out of, making fun of DJs at Coachella and calling them “button pushers.” I understand his perspective because, as someone who also plays in a band, it’s hilarious to watch the “button pushers” sometimes. The problem is that this becomes the definition of DJing, which is pretty narrow. So it’s nice to see people shedding light on the fact that not all “DJs” just press play. In fact, the “pressing play” thing is very new.

There’s a lot of innovative artists from Toronto. What is it about the city that makes it different?
Flo: It’s a big city with a lot of people from a lot of different backgrounds who are starting to have a sense of self-efficacy. After five years of Drake and deadmau5 doing what they do, I think it stirs up the environment and makes kids say, “Hey, maybe we can do this too.”

Do you see the blending of hip-hop and electronic as a growing trend?
Tune: Definitely, it makes total sense. They’re both huge genres and no one wants to listen to just one thing anymore, so the blending is just natural.

What’s the next stage in your evolution?
David Matisse: More music! More touring! Trying to evolve our show and our music as always! There’s only a handful of live bands in EDM and Keys N Krates are one of the most innovative. The Dim Mak-signed group, which consists of an award-winning turntablist, keyboardist and drummer, has developed a reputation over the years for their distinctive productions and energetic performances. In the video above, watch as the trio rehearses for their upcoming tour with Gladiator and Thugli.