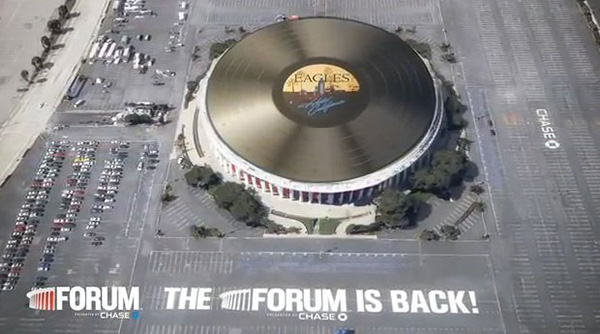 Vinyl lovers rejoice! The Forum in Inglewood, California, has been fitted with what organizers claim as the world’s largest vinyl record.

The former home of the Los Angeles Lakers and Kings recently received a $100 million renovation and the roof installation celebrates its re-opening and The Eagles — the Forum’s first performer since renovation efforts began last year.

Officials say thousands of visitors flying into LAX will see the 407-foot vinyl record mounted on the roof of the Forum.

“Built in just 10 days by Glendale-based promotion company Pop2Life, the nation’s only 120-foot aluminum truss circle is composed of 250,000 square feet of printed vinyl and over 50,000 pounds – about 25 tons – of materials, with letters as tall as the iconic Hollywood sign.”