After careful consideration, Avicii has picked France’s Notre Dame and Japan’s Tokima Tokio as the winners of DJcity’s “Without You” remix contest!

The original plan was to select one winner, but Avicii loved both Notre Dame and Tokima Tokio’s remixes, so he chose both! They will each receive $5,000 cash and have their remixes released on Geffen Records.

Listen to their remixes and the original version below.

Thank you to everyone who entered the contest!

Related: Finalists for Avicii ‘Without You’ Remix Contest 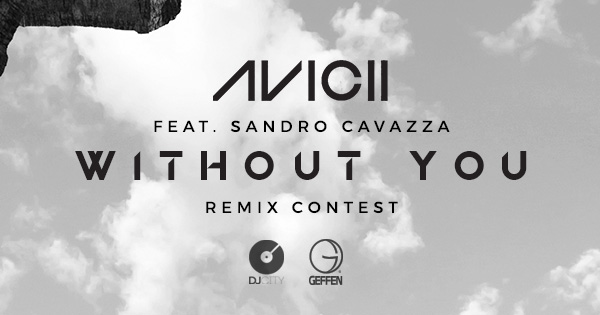 DJcity has picked the 10 finalists for the official Avicii “Without You” remix contest.

We received entries from all around the world and of a wide variety of styles. It took a long time to listen to them, but we made sure to hear each one. Now that we’ve selected the finalists, it’s up to Avicii to pick the winner.

The winner, which will be announced on Sept. 20, will receive $5,000 and have his or her remix released on Geffen Records.

Check out the finalists below (in alphabetical order).

Related: Watch This Drummer’s Entry Video for Avicii’s ‘Without You’ Remix Contest The deadline to enter DJcity and Geffen Records’ remix contest for Avicii‘s new single “Without You” has come and gone. The judges spent the weekend reviewing submissions and found one that really stood out.

London-based DJ/producer AFISHAL‘s remix has unfortunately been disqualified for containing unauthorized samples. However, his video deserves to be shared as an honorable mention.

AFISHAL performs his remix live on the Tremor, a drum set-like MIDI controller he designed in collaboration with Roland. Pre-programmed samples, lights, and graphics are all triggered with the hit of a pad. AFISHAL has toured the world with his innovative rig, including a performance for Prince Harry.

DJcity will announce 10 finalists for the “Without You” remix contest on Wednesday, Sept. 13. Avicii will then select the winning remix which will be announced on Sept. 20. The winning submission will be released by Geffen Records as an official remix. The winner will also receive a prize of $5,000 and will be featured on DJcity’s blog and social media.

DJcity has teamed up with Geffen Records on a remix contest for Avicii‘s new single “Without You” featuring Sandro Cavazza. The infectious progressive house track recently debuted at No. 18 on Billboard’s Hot Dance/Electronic Songs chart.

The winning submission will be released by Geffen Records as an official remix. The winner will also receive a cash prize of $5,000 and be featured on DJcity’s blog and social media.

Get more info and enter the contest here.