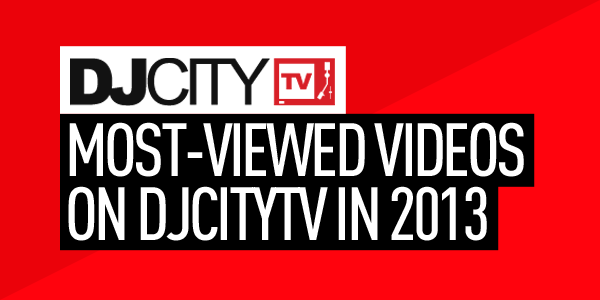 2013 has been a big year for our YouTube channel, DJcityTV. We’ve produced exclusive content for established artists such as Kendrick Lamar, DJ Jazzy Jeff and Martin Solveig along with newcomers MAKJ, Kennedy Jones and Eric Bellinger. In terms of numbers, overall viewership quadrupled and our Cutting Room series has blown up worldwide.

Below is a list of our Top 5 most-viewed videos of the year which includes content from Jeremy Ellis, Scoop Deville and DJ Five. Be sure to subscribe for updates and let us know which type of videos you’d like to see more of.


Maybach Music’s tag is one of the most recognizable in recent years having been featured on numerous hits. In 2012, DJcityTV spoke with the voice behind the tag, Jessica Gomes. The beautiful Australian model told us how she met Rick Ross and became the “Maybach Girl.”


In terms of views and fan feedback, Chi-town’s episode of the Cutting Room has yet to be de-throned. With an all-star lineup featuring Red Bull Thre3style US Champions Big Once and Trentino, along with Boi Jeanius, Flipside and MaddJazz, Chicago’s legendary scratch session has become the benchmark for the series.


DJcityTV’s exclusive interview with Scoop Deville is the most-viewed video from our Behind the Beat series. During a studio visit, the Los Angeles-based producer spoke to us about producing Kendrick Lamar’s hit singles “Poetic Justice” featuring Drake and “The Recipe” featuring Dr. Dre.

DJ Five has been killing clubs in Las Vegas for years and rarely does mixes and live streams. In a special appearance on March 4, 2103, Five rocked our season debut of the MikiDz Show for over a hour reminding us why he’s one of our favorite club DJs.