DJs may not know where to eat, stay, and play when they get booked in cities they’ve never been to before. To help them get the most out of their visit, DJcity has a monthly series called DJ Travel Tips. The series highlights some of the best things to do in some of the most popular destinations around the world. For this edition, DJcity spoke with four DJs from Houston, a longtime hip-hop hub and the location of Super Bowl 51.

“Stay at Hotel ZaZa, it’s located in the Museum District and is one of the nicest hotels in Houston. If you’re into arts and culture, there are several museums to visit in the area. If you’re on a budget, the Hilton and Hyatt Regency in downtown are also very nice and surrounded by things to do, such as parks and places to eat.”

“Check out Laurenzo’s on Washington Ave for the prime rib or fish and grits, Frank’s Pizza for a pie, and The Turkey Leg Hut, which is known for their stuffed turkey legs and exotic surf and turf plates. The hut also has DJs at night. For your Sunday morning gig hangover, try the chicken-fried lobster brunch at MAX’s Wine Dive. If you want to see the origins of Houston’s chopped and screwed culture, take a trip to MLK Boulevard and hit up Timmy Chan’s for some wings and rice served with your choice of Kool-Aid.”

“If you have a good amount of time on a nice afternoon, a trip to NASA’s Johnson Space Center is always a fun and educational adventure. Houston’s Museum District offers various facilities ranging from the Museum of Natural Science and to the jaw-dropping Holocaust Museum. Rice Village, home of Rice University, has a lot of boutique shopping and great restaurants and bars. Also, hit up Vinh or George at Mega DJ Center to get the latest and custom DJ gear and accessories.”

“If bar hopping is your thing, Midtown is your place. Start at The Dogwood on a Thursday, Friday or Saturday night, and make your way around the block and down the streets. Washington Ave also has a bar hopping buzz. Start at Kung Fu Saloon and make your rounds on foot from there. One of the newer, high-end spots in the city is Clé. Big names roll through there on the regular, like Afrojack, Steve Aoki, Drake, and Justin Bieber. It has an outdoor pool with cabanas, and in the summer during “Sunday Fundae,” it feels like Vegas. AURA and La Roux often have some great talent also.” 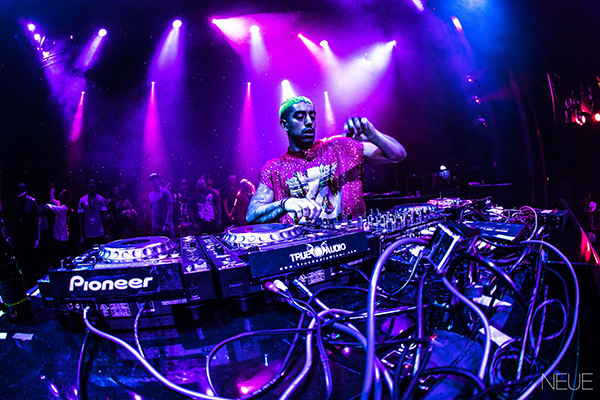 Dancehall has made a major comeback in both the underground and mainstream over the last year. But before hits like “Work” and “One Dance” took over the airwaves, 23-year-old DJ/producer Ape Drums was cranking out Carribean-infused heaters in his Houston studio.

In 2014, DJ Craze and Kill the Noise’s label Slow Roast Records took notice of Ape’s unique style and released his debut single “Bashment.” The track took the dance world by storm and set the tone for his future.

The following year, Ape performed at influential festivals like SXSW, Holy Ship!, Mad Decent Boat Party, and Amsterdam Dance Event. He also toured extensively in the US and Australia.

Ape has shown no signs of slowing in 2016. In June, he dropped two singles on Mad Decent, “The Way We Do This” featuring Major Lazer and Busy Signal, and “Go Crazy” featuring Dougie F. The songs charted at number two and 11 on DJcity’s Top 50, respectively.

We spoke with Ape via email to learn more about his background and sound.

You have a unique production style. How would you describe it?

I’d describe it as worldly, Caribbean-influenced.

How did you get into dancehall?

I purchased an old cassette based off of the artwork when I was about eight years old. I had no idea what type of music it was, but I’ve been into it ever since. I don’t remember the name of the tape, but it was a collection of bashment and reggaeton mixes.

You were producing dancehall-influenced tracks before it was a trend in the mainstream. How do you feel about the genre’s current popularity?

You were in a b-boy crew in high school. Do you still break dance?

I wish, but I have no time for it. I try a few moves a couple of times a year just to see if I still have it.

Did breaking influence you as a DJ/producer?

No, but dancing did shape my musical interest. I’m mostly into music that is very danceable, which is why I’m into dancehall. I think that’s the best genre of music to dance to, whether you’re solo or with a hot gyal.

How often do you DJ?

It depends. Sometimes I play every single weekend, and sometimes I take time off to work on new material.

What are your favorite cities to play in and why?

Miami, New York, and Amsterdam, just to name a few. The people have so much culture and recognize great music. They know how to have a good time.

If you could collaborate with any artist, who would it be?

Related: Ape Drums Teams with Major Lazer and Busy Signal for ‘The Way We Do This’