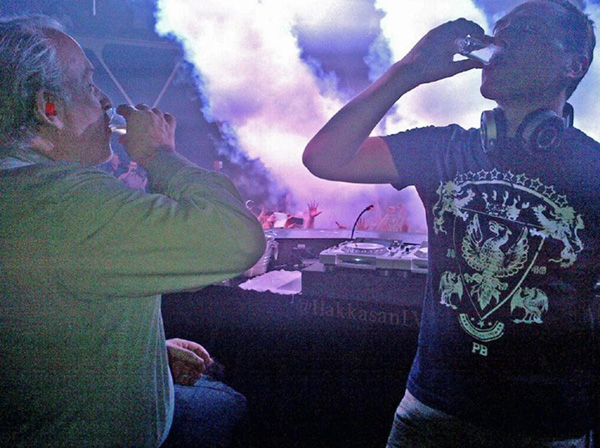 Huffington Post has reported that Tiësto met with legendary disco producer and Daft Punk collaborator Giorgio Moroder at EDC Las Vegas. The two didn’t get a chance to talk much but took shots (as the photo above suggests) and exchanged numbers.

Tiësto said the following about Moroder, “He’s such a talented producer and to meet him, yeah, it’s one of those things, like, so cool. He comes to my show and he stayed the whole set actually; I played for three hours and he was there for three hours. He’s in his seventies and still rocking strong. We did shots together and it was fun to hang out together. I was honoured that he came actually.”

He continued, “We are going to sit together soon in L.A. or Vegas and we’re really going to talk. We need to have a conversation but something will happen. I mean, he did a collaboration with Daft Punk, so why not with me?”

Tiësto didn’t stop there though, when asked about his thoughts on Daft Punk’s new album Random Access Memories, he replied, “It’s cool to like Daft Punk. Even if you’re not into the song, as soon as you hear [“Get Lucky”], you see all the cool people go, ‘Oh yeah, this is cool, that’s my song,’ and they don’t really even enjoy it.” “I’m destroying them now, sorry Daft Punk.”

If a collab goes down, there’s no doubt whatever they cook up will scrutinized by the dance community, especially in light of Tiësto’s recent comments.