It seems like every week we hear about a celebrity who’s become a DJ. The latest to join the ranks is RJ Mitte — the actor who played Walt Jr. aka Flynn on the hit TV show “Breaking Bad.”

The 22-year-old recently announced his upcoming “Breaking Beats” tour, which will make stops in five cities and include props from the AMC show.

Check out the preview and schedule below: Comedian Russell Peters has been DJing for 30 years and even used to compete in battles.

During a recent interview with Los Angeles’ Power 106, the Toronto native talked about his background as a DJ and what he thinks about the new generation. Watch the video above for some cool stories and a couple laughs.

Also, be sure to check out Russell’s performance on DJcity’s “MikiDz Show” from 2011. T-Pain is famous for singing on hit singles but the Florida native was actually a DJ before he became a singer and currently gigs on a regular basis.

During a recent interview with Hot 97’s “Ebro in the Morning,” the two-time Grammy winner spoke his mind about the current state of DJing, saying that EDM DJs are hurting the culture:

“You know who’s hurting DJs? House DJs. EDM DJs … If you’re a DJ and you can’t rock a crowd from someone else’s computer then you’re not a real DJ.”

Although it sounds like a generalization, we presume he wasn’t talking about every single EDM DJ, but rather those who pre-record their sets (David Guetta and Paris Hilton were named specifically).

Note: the section about DJing begins at nine-and-a-half minutes in.

T-Pain also discussed his current label situation, his career in comparison with Lil Jon’s and his recent performance without auto-tune that went viral. Yes, even deadmau5 has a price. Although the outspoken DJ/producer has been feuding with Paris Hilton as of late, it turns out he’s willing to perform with her for two million bucks if given the chance. Watch the TMZ video above to see mau5 discuss the socialite-turned-DJ outside a fine-dining establishment.

UPDATE: deadmau5 tweeted Monday night that he was just joking:

No. I will not be sharing a stage with paris hilton. It's a joke. Relax. Back to my vacation. 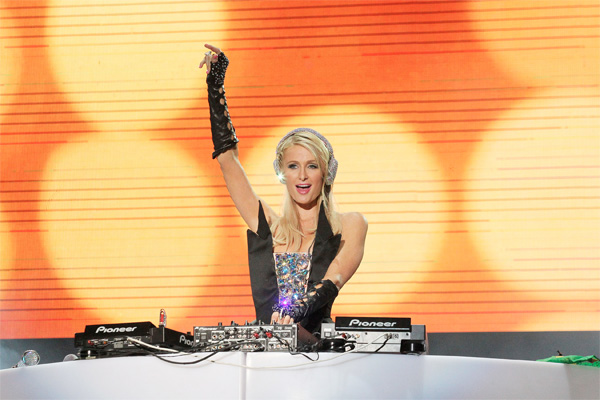 Socialite Paris Hilton has teamed up with Amnesia Ibiza to host a series of parties from July 31 through to August 31 aptly named “Foam & Diamonds.”

Hilton is heading to Ibiza before her upcoming album drops on Cash Money Records. The album is reported to feature production from Afrojack and a guest appearance from Lil Wayne among others.