Borgore is a household name in the dance music scene. Whether he’s producing, DJing, singing, rapping, or shutting down festivals across the world, real name Yosef Asaf Borger stands as one of the most well-respected dubstep artists.

Being the founder of Buygore Records and doing gigs all across the globe, he still manages to find time to test the waters and experiment with new sounds. Adventures in Time is his first jazz album, a pleasant surprise from his usual hard-hitting, head-banging, moshpit-friendly tunes.

On day one of HARD Summer 2018, Borgore’s back-to-back set with Getter proved to be one of the most highly-anticipated acts on the bill. DJcity caught up with Borgore in his trailer after his performance, squeezing in the 10-minute time slot given by his management to accommodate his busy schedule. Before we begin the interview, he pours himself some Jameson, blaming it on the “long weekend” ahead.

How does it feel to be back at HARD Summer without Destructo?

I don’t think it affects me personally. He’s moved on to other things; he has big ventures. I don’t know what people know and don’t know, but HARD is something he built that was incredible. I’ve always really appreciated HARD. It was my first show where I was like “holy sh#t!” It was M.I.A., Die Antwoord, and me, a dubstep producer from a bedroom somewhere in Tel Aviv. I was just blown away. Destructo did amazing things, and the festival is still going.

How was your set?

Usually, I’m nervous, but HARD had me a little bit more nervous. There were so many different factors, including some serious competition on the other stages. The second thing was: I live in Los Angeles, so there’s a lot of friends and people I hang out with that come to see me. It becomes more personal. The third thing was: HARD was the first time Getter and I did a [back-to-back set], and it was on a big festival stage. We didn’t practice on a small festival stage. We went straight into headlining that stage. We wanted to practice and go over things, but we are both extremely busy. I was in Europe for two months before that show, so we couldn’t really hang out and work on it. Although we are really close friends, I wish we had more time to just chill. But all and all it was super fun.

You’ve had features with everyone from Miley Cyrus to G-Eazy and Waka Flocka Flame. What do you look for in a feature?

It’s like dogs. [laughs] I’m not very picky. I just love working with other people. Every singer is like a new instrument. They sound different. They bring something else to the table, so any collab for me is blessed. Whether it’s the biggest artist in the world or someone who just got his name, you can learn or do something with anyone. There’s a very small list of people that I wouldn’t work with, and I’m also not the type of person to throw shade. I’m not going to mention anyone, but in general, most people are more than welcome.

With dubstep going back into the underground, do you feel you have to change your sound?

It really depends where you’re playing. It depends on the venue, the crowd, and the country. You have to know the crowd. Before the set, I do my homework. If it’s a Las Vegas show, obviously I’ll play way more commercial. If it’s a Borgore show, then I’ll probably play the harder stuff.

What are you playing in the club right now?

My sets are kind of funny. I play the popular stuff like Britney Spears mixed with the gnarliest riddim drops. I like to play a lot of hip-hop mixed with like riddim, but then all of a sudden I’ll play a super commercial Steve Aoki song from 2012. I just play party music, but with a strong spice.

Do you prefer playing clubs or festivals?

It really depends on the club and it really depends on the festival. Some festivals can have the biggest crowd, but they can be people who randomly went to a festival. It’s kind of annoying to play for them because they don’t know what they’re listening to. At the same time, you can play a festival, and the crowd is the best f#cking crowd in the world. That sh#t — it’s a crazy experience. Clubs are, for the most part, safer for the DJ to have fun and explore. But then again, you can end up on a built-in crowd night, and you have to play a little safer. I personally prefer to play to an open-minded crowd rather than a crowd where I need to play certain songs.

What’s your optimal setup when you perform?

I like to use four Pioneer CDJ-2000NXS into a Pioneer DJM-900NXS most of the time. I don’t really care about the mixer, as long as it’s a Pioneer. And then two microphones. I’ll usually have an idea of a set on the two middle CDJs — just like a general playlist. I’ll play my set and all of a sudden I’m like, “Okay, they like this type of music.” So I start pulling songs from playlists on the two CDJs on the ends.

What are three things you need in the studio?

A computer, speakers, and a MIDI keyboard. [laughs] Because it’s really difficult for me to write music without being able to play it. I’m not so much of a “draw it with the mouse” guy. I’m more of a “play it” type guy.

How has the music scene changed since you started?

It’s growing in crazy ways. When I started, there was more of a UK dubstep boom in Europe and Israel. Then it came [to the US] with Skrillex, it was like the biggest thing. Then there was the whole big room, Martin Garrix, and all that sh#t. Then it changed into pop: The Chainsmokers, Major Lazer, DJ Snake. Right now, we’re kind of waiting for the next wave. The electronic scene is chill because the music scene is mainly focused on SoundCloud hip-hop. As far as electronic music, it’s back in the underground. We will see what’s next. 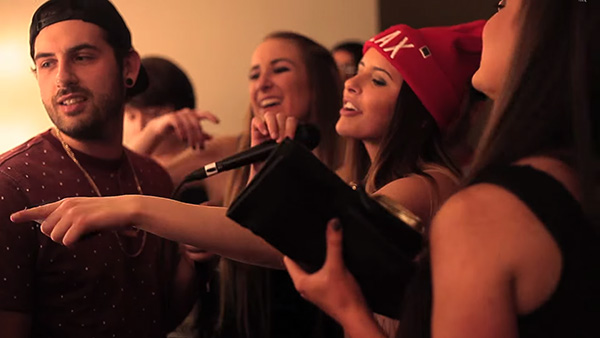 Israeli DJ/producer Borgore has unleashed entertaining visuals for his track “Wild Out,” featuring rapper Waka Flocka Flame and British singer Paige. The music video not only sells the track but also their live show, which as the video depicts is far from typical. Dim Mak’s Steve Aoki also makes a cameo.

Related: Steve Aoki on Being “The World’s Hardest-Working DJ”