Earlier this month, a diverse group of DJs from around Los Angeles got together for the first DJcity Ladies Linkup. The exclusive event, which took place at DJcity’s headquarters, included DJs and turntablists such as DJ Shortee, PattyClover, Nikki Duran, and DJ Eliza May.

“The energy was full of good vibes, inspiration, and motivation,” Nikki Duran wrote on Instagram. “It’s an amazing feeling when you can connect with other ladies about this passion that is DJing.”

Watch the recap of the Ladies Linkup above.

Related: The Women Who Have Contributed to DJcityTV Last Friday, DJs from around the U.K. got together for the annual DJcity Linkup in London. The exclusive event, which took place at the Ace Hotel, featured guests like Charlie Sloth (BBC Radio 1 and 1Xtra), DJ Stylus (BBC Radio 1Xtra and SiriusXM), Nathan Dawe, Manny Norte (Capital XTRA), James HYPE, and JFB (three-time DMC UK champion and 2016 Red Bull 3Style world finalist). Like all DJcity Linkups, DJs were able to catch up and build with each other. There were also jam sessions and interviews.

Watch our recap of the Linkup above and check out DJcity UK for the latest music (non-UK subscribers can log in with their DJcity accounts). On Saturday, hundreds of DJs from around the UK gathered at Red Bull Studios in London for the DJcity Linkup. The gathering, which was organized by DJcity UK, brought together a diverse group of DJs under one roof. They included radio personalities such as MistaJam and Swerve along with turntablists like Brace, JFB, and Jon1st.

Website UK Grime wrote, “It’s safe to say, many of those in attendance left the event inspired and re-energised.”

Check out the photos below. 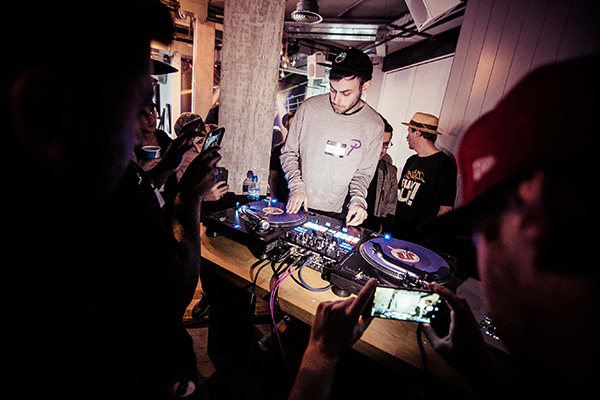 Outside of Red Bull Studios London

All photos by Samy Jourdan