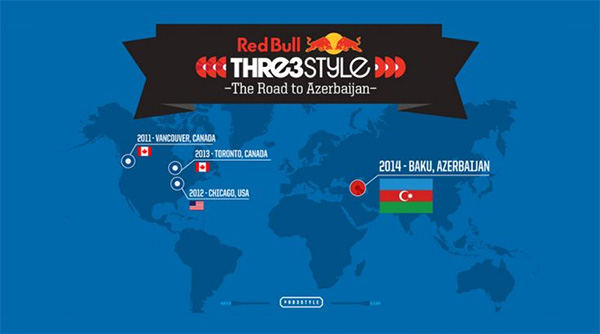 Yes @djcubicle that is correct. @RedBull #USA won’t be taking part in #RB3Style 2014.

Established in 2008, Thre3style is considered by many as the biggest DJ battle in the world due to its versatile nature. Unlike the DMC, which focuses solely on turntablism, Thre3style encompasses all elements of DJing and contestants are judged on how well they rock a party.

Adding even more intrigue, Red Bull has decided to hold its world finals in Baku, Azerbaijan. While there’s certainly amazing DJs who hail from countries across the world, the decision to hold its finals in Azerbaijan is confusing.

On the bright side, Thre3style is now accepting applications from any DJ in the world. This marks a departure from previous years in which contestants were selected by a panel appointed by Thre3style. While there won’t be competitions held in the U.S., American DJs will still have a chance to compete as a Wild Card DJ.

Below is a list of countries where next year’s Thre3style will take place (subject to change):

Shout to our friends at Remix Report who brought this news to our attention.