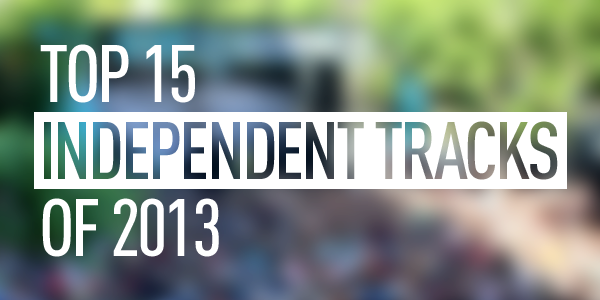 2013 has been an enormous year for independent club music. Established artists such as Major Lazer, Hardwell and Showtek scored multiple hits and emerging artists DJ Snake, MAKJ and TWRK had breakout years. Here are the top 15 independently released tracks of 2013, based on downloads by DJcity subscribers.

Diplo’s side-project is on fire thanks to “Bubble Butt” — one of 2013’s biggest hits and the fourth single from the group’s second album, Free the Universe. The anthem received considerable radio support thanks to features from superstars Bruno Mars and Tyga.

An international hit, Major Lazer’s third single from Free the Universe is built on a pulsating dancehall rhythm and an epic horn sample. With more than 35 million video views and numerous remixes, it’s no wonder this track was one of the year’s biggest.

Steve Aoki connected with Chris Lake and Tujamo for this big room house anthem just in time for festival season. With a massive synth and pounding drums, “Boneless” received support from leading DJs and electrified fans throughout the summer.

The Dutch duo’s anthem featuring fellow countrymen We Are Loud! and singer Sonny Wilson immediately became a festival staple when it debuted in August. The track combines elements of progressive, reggae, drum & bass and hard style.

California native MAKJ has been killing the scene with bootlegs but his collaboration with Dutch superstar Hardwell was his breakout moment. Debuted by Hardwell at Ultra Music Festival, “Countdown” became one of his peak-time secret weapons during the summer.

2013 saw the rise of twerk — a booty shaking sub-genre often laced with hand claps. The aptly-named production duo TWRK helped catapult the style to a larger audience with this sample-laden banger.

California DJ/producer TJR took the emerging sounds of Melbourne Bounce to greater heights with this carefree party anthem. “What’s up Suckaz” has been a staple in sets across the world thanks to its pounding bass, razor sharp synths and catchy vocals.

TWRK’s ode to New Orleans Bounce brought UTP’s “Nolia Clap” into the future and was the group’s breakout hit.

Hardwell has been rising for years but 2013 was his biggest yet. His collaboration with Dirty Dutch duo W&W has become an electro favorite for fist pumpers across the world.

English DJ/producer Chris Lake has seen an impressive year as a solo artist and as head honcho of Rising Music. Prior to his summer anthem with Steve Aoki & Tujamo, Lake released “Ohh Shhh” which made clubs go wild with its vocal samples, bouncy synth and dirty bass.

There’s nothing slow about Showtek’s heavy hitting progressive track which opened the year with a bang. “Slow Down” helped solidified the duo’s position as one of the Netherlands’ top musical exports and set the stage for “Booyah!”

15. DJ Snake & Lil Jon
Turn Down For What
Mad Decent

Earlier this year, France’s DJ Snake took the world by storm with his catchy trap anthem, “Bird Machine.” In September, Snake linked with party ambassador Lil Jon for their massive club hit “Turn Down For What.” The track was so successful that Sony Music re-released it last week.